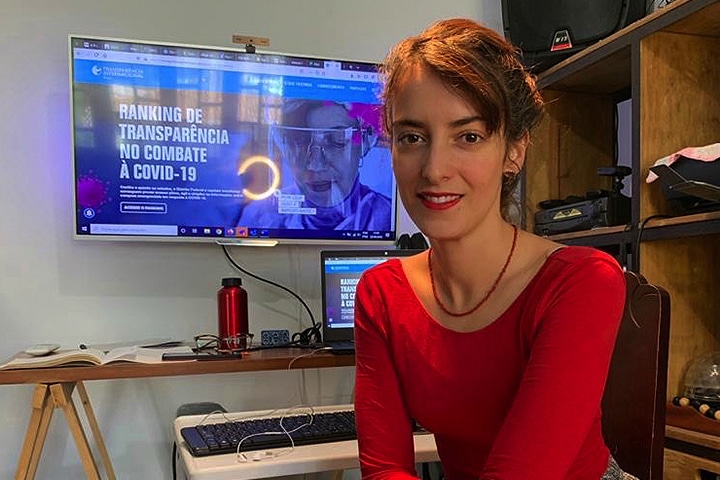 Flavia Collaço has spent months on a report about the connection between corruption and the fight for the climate in Brazil. Now she is using the training she got from Denmark to make her conclusions widely known.

By Camilla Qvistgaard Madsen and Jeppe Vestergaard Nielsen for Globalnyt.dk. Read the article and hear the podcast with Flavia Collaço (in Danish).

It’s been a crazy week. I haven’t even read my emails or been checking Facebook, is the first  Flavia Collaço says when we finally manage to get hold of her.

She has had a deadline to meet for a report that describes the connection between corruption and climate changes in Brazil.

Our goal has been to expose how corruption has a negative impact on the climate and environment, she explains.

The soon to be published report is Collaço’s great achievement. It will provide a series of examples of linkages between climate change and corruption cases such as unlawful logging in the Amazon and swindle. She is the main researcher in this field at Transparency International’s branch in Brazil – a branch that has more than enough to do.

The political situation in Brazil affects the whole world. We have the greatest biological diversity on the planet and we have the largest forests and longest rivers, but for political reasons, we do not protect any of it sufficiently, she says.

For an NGO like Transparency International it is a difficult political situation to tackle. Part of Brazil’s current president Jair Bolsonaro’s election campaign was to exploit the economic potential of the Amazon. Since then, deforestation in the rain forest has increased – to the great concern of experts and organisations all over the world.

At the same time, the president does not care much about the point of view of the NGOs that want to protect the rain forest. Amongst other things, he has described them as cancer that he cannot get rid of.

Dialogue as a way forward
Precisely the lack of dialogue between the NGOs and the government prompted Flavia to sign up for Danida Fellowship Centre’s course “Strengthening Policy Dialogue”. It was to take place in Denmark during the spring and summer of 2020. However, just a couple of weeks before Flavia was about to travel to Denmark in March, everything closed down because of the coronavirus. Flavia could not travel and the training went digital.

Even though the training took place online, the course was a very good experience, but it was still such bad timing, says Flavia.

Nevertheless, she picked up lots of useful knowledge during the digital classes; knowledge that she wants to use to advocate for policy changes.

We at Transparency International are just not strong enough on our own to combat the setbacks taking place at the moment. But, if we join forces with others, maybe we can actually get somewhere. I hope that this course has given me the knowledge I need to build alliances – and to get others to realise that we need to hurry up and get things changed before its too late, says Flavia Collaço.

What she has learnt on the Danish course can be boiled down to a single ray of hope:

It taught me how to enter into dialogue with a government that does not want dialogue.

Believes only in status quo
However much Flavia Collaço has learnt and however many examples she documents and includes in her report, she is fully aware of the fact that her work is not going to turn Brazilian politics on its head.

I have reached the point where the goal for doing research is no longer to change the law or coming up with great proposals. I just hope that we can maintain the status quo,  says Flavia Collaço

She sees her work – and the report soon to be published – as fundamental for the fight for the climate – and against corruption.

It is really important to draw attention to the linkages between corruption and the destruction of our climate because there are a lot of people who don’t understand it.

I am sure if more people were aware of how closely corruption and the deterioration of the climate are connected, nature conservation in Brazil would not face the setbacks we see at the moment.

Flavia Collaço from Brazil
Study: The course “Strengthening Policy Dialogue – the role of Governments, Intersects organisations and Civil Society” 2020 was arranged by Danida Fellowship Centre. The plan was that Flavia Collaço participated in the course in Denmark. Because of Covid-19 the course was changed from an in-person to an online format.Today: Heading the Research of Climate and Corruption unit for Transparency International Brazil.

Read about the other podcasts with Danida alumni

Translated from Danish by Kate Girvan.