Dr Alejandra de Jesús Cantoral Preciado is the very first Danida Fellow on a Mobility Grant. She came to Denmark to strengthen research collaboration in non-communicable diseases between Denmark and Mexico.


Dr Alejandra de Jesús Cantoral Preciado, a researcher at Mexico’s National Institute of Public Health, is forthright in her assessment of the health situation in her country.

First comes USA, then Mexico is ranked second on adult obesity according to OECD. As a country, it is not exactly the kind of second place you strive to have. There is no doubt that we face a huge health challenge, is her laconic judgement. 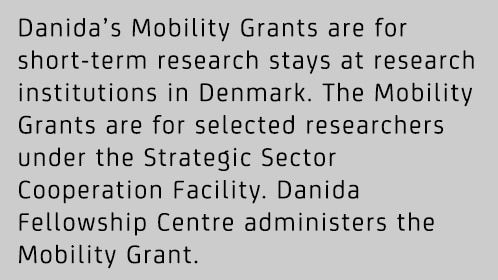 She elaborates on her statement,

The prevalence of overweight and obesity is more than seventy percent among adults. Thirty-three percent of the children and thirty-four of adolescents between 5 and 19 years of age are overweight or obese. Mexico is also among the top ten countries in the world when it comes to diabetes. It is not an exaggeration to say that non-communicable diseases like diabetes, obesity and cardio-vascular diseases are ravaging the population, she says.

Dr Alejandra de Jesús Cantoral Preciado has just completed her stay in Denmark at the University of Copenhagen’s Department of Global Health on a Mobility Grant. It is a new research grant offered by Danida to facilitate the creation and development of international networks and research collaboration through research stays in Denmark.It is for selected partners in the growth and transition countries that Denmark collaborates with under the Strategic Sector Cooperation Programme.

International research collaboration
Dr Alejandra de Jesús Cantoral Preciado is the first Danida Fellow ever to benefit from the Mobility Grant. She came to Denmark with two priorities on her agenda.

Firstly, she wanted to contribute to strengthening the on-going research in cardio-metabolic diseases in Mexico at the University of Copenhagen.

Secondly, she wished to equip herself with knowledge from Denmark to influence health policies in Mexico to curb the rising curve in non-communicable diseases.

Reflecting on her stay in Denmark, she says that it did indeed strengthen the research collaboration between the University of Copenhagen and the National Institute of Public Health in Mexico. She feels that her Danish colleagues at the Global Health Department showed great interest in her research on the health situation in Mexico.

Historically, Danish development researchers have mostly focused on Asia and Africa, not so much on Latin America. I think I contributed to redirecting their interest so that in future they will look at Latin America as well and establish the basis for future collaboration, she says.

European research methods
In Denmark, Dr Alejandra de Jesús Cantoral Preciado participated in several seminars including the European Diabetes Epidemiology Group Conference where she presented her research. She also managed to link up with researchers from Aarhus University, the Steno Diabetes Centre and some of the other departments at the University of Copenhagen.

As a Danida fellow on a Mobility Grant, I see myself as a facilitator for the creation of a larger network among health researchers focusing on non-communicable diseases in Mexico and Denmark, she says.

In Latin America, we are so used to the American research approaches as we mainly communicate with American researches and publish our papers in American journals. Some differences emerge when you look as simple things like the guidance for the classification of diseases. In Europe, you commonly use the WHO standards, while we besides the WHO standards use the standards of the American Diabetes Association, the Institute of Medicine and Centers for Disease Control and Preventions among others,she says.

Future collaboration
Dr Alejandra de Jesús Cantoral Preciado is certain that her stay in Denmark has played a role in developing a strong basis for future research collaboration on the non-communicable diseases.