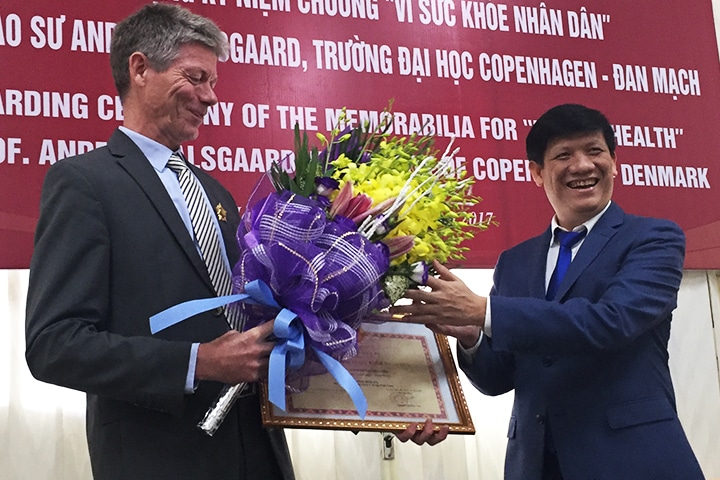 Anders Dalsgaard, Professor of Veterinary Public Health at the University of Copenhagen has been awarded the Vietnam Ministry of Health’s Memorabilia Medal for his contribution towards improving public health. The Danida Fellowship Centre collaborates closely with Anders Dalsgaard on a number of capacity building courses under DFC’s Scholarship Programme.

In recognition of his extended involvement research and capacity building in the food and health care sectors in Vietnam, Anders Dalsgaard, Professor of Veterinary Public Health at the University of Copenhagen was on 8. November awarded the Vietnam Ministry of Health’s Memorabilia Medal for his contribution towards improving public health. The Memorabilia Medal is the highest honour awarded to foreign scientists for their contribution to public health in the country.

At the award ceremony, that took place in Hanoi, the Vice Minister of Health, Professor Nguyen Thanh Long, talked at length about the 55 year old Danish professor’s significant involvement in Vietnam. He especially acknowledged the large body of research that has resulted from Anders Dalsgaard’s engagement.

Professor Anders Dalsgaard is a scientist of international repute. He has written more than 200 articles on the microbiology of water, food and sanitation. The high quality of his research work has been verified in numerous peer-reviewed articles in international journals, the Vice Minister said.

Professor Anders Dalsgaard first visited Vietnam in 1994 to do PhD research on cholera. It was at a time when the condition of sanitation in the country was in dire need of improvement. From the beginning, he realised that one way of assisting and raising sanitation standards was to build up the capacity of researchers and staff in the health, water and sanitation sectors.

The Vice Minister of Health, Professor Long, congratulated Anders Dalsgaard for his efforts in the capacity building of researchers and staff in the health sector.

With the assistance of DANIDA, Professor Anders Dalsgaard has worked tirelessly to build capacity and train staff within the areas of sanitation, food safety and health. Many of the researchers he trained have now important roles in Vietnamese ministries and international organisations operating in Vietnam, the Vice Minister of Health, Professor Long, said. 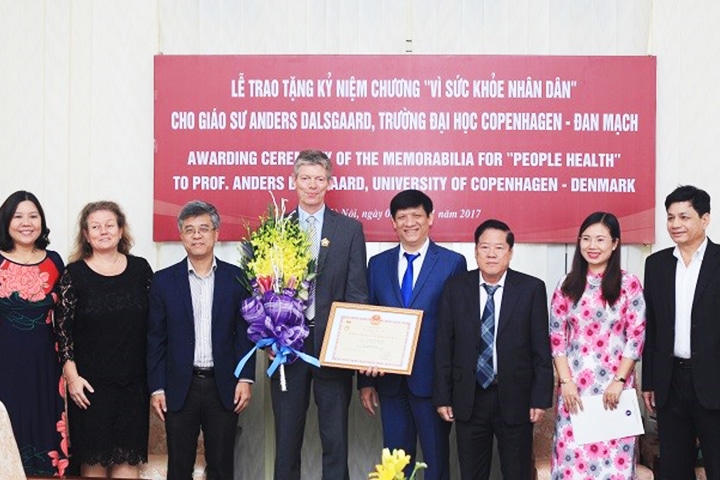 In his acceptance speech for the Memorabilia Medal, Anders Dalsgaard expressed his gratitude for the constructive collaboration and support of the National Institute of Hygiene Epidemiology and other colleagues and partners throughout the years.

I would like to thank the National Institute of Hygiene Epidemiology and other institutions for their support, and I would also like to extend my thanks to the Danish Government, DANIDA and the Danish Embassy, as well as to the EU and other International organisations, for their funding and support over time, Professor Anders Dalsgaard said.

Present at the event was Anders Dalsgaard’s long-time colleague and research partner, Phung Dac Cam, Professor in Medicine at the National Institute of Hygiene and Epidemiology. He and Dalgaard’s former and current students expressed their heartfelt thanks to the Danish professor for his dedicated collaboration, guidance and support.

Over the past 20 years, the DANIDA research programmes have provided Vietnam with support to the tune of more than 30 million DKK. They have benefitted 15 PhD, numerous Masters Students, and they have also offered various training courses within the fields of epidemiology, microbiology and food safety.