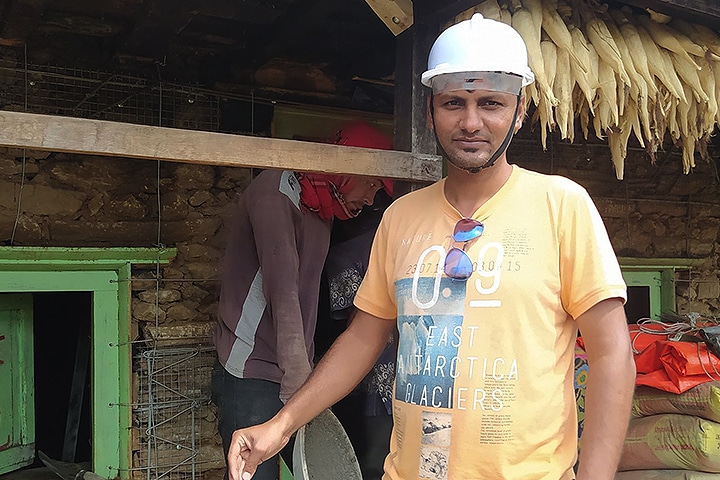 Nepal is one of the countries hardest hit by earthquakes. Nabin Joshi uses what he learnt in Denmark to build houses that remain standing when catastrophe strikes.

By Camilla Qvistgaard Madsen and Jeppe Vestergaard Nielsen for Globalnyt.dk. Read the article and hear the podcast with Nabin Joshi (in Danish).

Shortly before lunch on Saturday 25 April 2015, Nabin Joshi was busy at home. Suddenly the ground beneath his feet began to shake. He quickly ran out of the house. He was not the only one, his neighbours were running out of their houses too. People were shouting and panicking. The biggest earthquake in recent history had just hit Nepal.

My home is in a part of Nepal where we have never had an earthquake before. So when I felt the tremors, I knew that other parts of the country would be even worse off, he says.

It was  715 kilometres away from the epicentre that Nabin felt the tremors. In the capital, Kathmandu, and in other big towns it was much worse: 9,000 people lost their lives and the homes of more than half a million were destroyed.  Nabin watched the news reports from around the country. The damage was severe.  Three days later, he travelled to one of the harder-hit areas to offer his assistance. Not long after, he was accepted as a Danida fellow to study for a Master of Disaster Management at the University of Copenhagen.

It was a fortunate coincidence, says Nabin Joshi.

Assembles a disaster preparedness toolbox
At the university in Denmark, the curriculum covered everything from planning for potential catastrophes to emergency aid after a disaster has happened.

In Nepal, there is usually just one teacher who teaches all aspects of a subject. In Denmark,  we had different teachers, each of them a specialist in his or her particular field. I think it makes one learn better.

After the course, when Nabin returned to Nepal, he felt greatly inspired. It was like he had a new toolbox with new approaches to handle catastrophes. Nabin is an engineer by training. The course in Denmark opened his eyes to different ways of using his engineering qualifications

One of the first things I do now is to draw up disaster preparedness plans for five or six villages. I look at the challenges they will meet during a disaster – and I make sure that they are well prepared. In some places, they have to build a water tank, in others, the challenges are different.

He also offers earthquake preparedness exercises to primary schools. This involves getting the children to leave their classrooms when the alarm sounds. The children then have to hold their books over their heads to protect them from falling stones. They have to gather in the yard where there are no buildings that can fall on them.

Houses must remain standing
First and foremost Nabin Joshi is rebuilding homes. Even now, five years after the earthquake, there is still work for him to do.

I live in Gorkha were many were very badly affected by the earthquake because their houses are right on the slopes of the mountain, he explains.

In Gorkha, there are still houses many to reconstruct because they were half, or totally destroyed. But it is a race against time to disaster-proof houses in Nepal.

Unfortunately, we know that there will be another earthquake at some point. Maybe tomorrow, maybe the day after. We have to prepare ourselves because we live in a place where we are exposed to many natural disasters. That is the geology of this place.

Three thousand five hundred houses were destroyed by the earthquake in his area. To date, several thousand homes have been rebuilt. They are standing on the foundations laid by the training that Danish development aid offered Nabin Joshi.

Today: Since Nabin returned to Nepal, he has worked as an engineer rebuilding houses in one of the most devastated areas since the 2015 earthquake.

Read about the other podcasts with Danida alumni

Translated from Danish by Kate Girvan.