Skip to content
Home » The Secret Behind Denmark’s Success

The Secret Behind Denmark’s Success

Danish MP in an exciting debate on Danish democracy with 23 fellows. 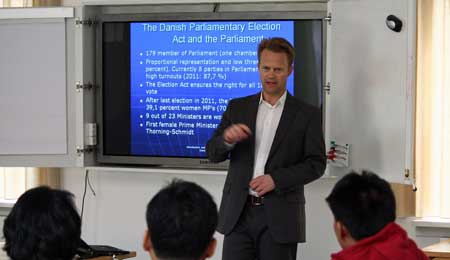 [quote align=”center” color=”#999999″]The way I will present Denmark is very positive. That is also a way of provoking you![/quote]

Although relatively young, Jeppe Kofod is one of Denmark’s most seasoned politicians in the area of development and foreign policy. As an MP for the ruling Social Democrats Party since 1998, he serves his 5th term in parliament where he is the chairman of the Foreign Policy Committee. He also holds the influential post of Foreign Affairs Spokesman for the Social Democrats.

Earlier this summer, in the Danida Fellowship Centre café in Frederiksberg in Denmark he set out to reveal the secret behind Denmark’s success. Why has Denmark managed to develop so well? The audience consisted of 23 fellows from Ghana, Nepal, Ethiopia, India, Benin and Uganda. Most of them were in Denmark on a two-week course on the “Role of Civil Society in Aid Effectiveness”.

The debate on Danish democracy forms part of the information about Denmark which all fellows are offered.
Jeppe Kofod talked about the strong social capital in Denmark and the ability to work together.

“In Denmark it is an asset if you are able to work in teams. And that is one of the reasons why we see development.”

He looks upon Denmark as a relatively homogeneous society built on trust.

“For me transparency is the answer”, Jeppe stated.

But also the high number of women in politics is crucial to Denmark’s success. In the Danish parliament 39 % of the members are women.

According to the MP this will become even more prominent in the future. “Women are better educated, they are healthier, and they will live longer than men,” Jeppe explained while turning another slide in his Power Point presentation.

How did Denmark get so far?

”It is fantastic,” said Charles Adjei Acquah, a health worker from Ghana. “And I am wondering how you managed to get where you are now? What is the secret? How did you get the whole society to conform to a certain lifestyle? A certain kind of values?”

Charles and a colleague were wondering why Danish pedestrians are waiting at red light instead of just crossing when there are no cars. In his country nobody would respect traffic lights.

“What is it that makes all Danes behave in a certain way?” he asked. He was interested in establishing that link, and later on during the sessions he asked Jeppe Kofod the same question.

Yasodha Nakarmi Shresta is working with inclusive democracy in Nepal.

“I learned a bit more about Denmark and democracy,”she said.

“But it leaves a lot of questions. For instance, how the Danish tax system works and how Nepal could learn from it to become more efficient?”

“In my country Nepal you don’t get anything back. No health facilities. No proper education. You actually have to pay yourself for a health insurance.”

She would have liked to hear more about Danes living below the poverty line and about those who are not happy with the state.

“I am also interested in the critical challenges people face,” she said and finding that perhaps the fellows were presented with a picture a bit too rosy.

Other fellows were also interested to know how the Danish tax system works and it sparked off a long discussion. Why are the Danes willing to pay such high taxes? Jeppe’s answer was straight forward: “If people get something in return they are willing to pay tax. It is as simple as that.”

Lots of questions arose among the participants during the exiting debate. And advice and cautions for Denmark as donor country were also offered. A young Uganda woman working with civil society puts a point across to Jeppe. Democracy is under pressure in the East African country.

“We have to mention the challenge of governance as one of the main challenges. We are concerned about the shrinking space for civil society in Uganda,” she explained.

And Benin participants challenged Jeppe on some of the decisions of the Danish government. They ask why Denmark has decided to phase out support for the poor West African country.

“But it is more efficient if you work in fewer countries. There are less transaction costs and therefore more money for development.”

He and the Danish government believe in division of labour: “Hopefully other countries want to contribute there,” he explains.

When the debate was over, the newsletter reporter found Jeppe while sharing pizzas with the fellows in the café. He asked him why a very busy politician several times a year takes his time to meet the fellows at Frederiksberg?

For Jeppe meeting the DFC participants is always an eye opener.

“These encounters are very exciting. I always feel that the participants are engaged in the discussions and very eager to ask questions. And I also bring new ideas back home. Their questions make me see things in a different light.”

“Sometimes us politicians take things for granted, but outsiders do not necessarily understand it. For instance, what is not written down in laws and rules? We are not only dealing with a system, but a way of life.”
When the time was up, a lot of participants flocked around Jeppe asking more questions and having their photos taken with the prominent MP.

Charles from Ghana was very impressed with Jeppe and his performance. “I am sure he will become prime minister one day. He is very educated.”
Information about Denmark

The debate with Jeppe Kofod on democracy is one part of the Information about Denmark to the DFC fellows. Danish Family Life is another theme for a debate evening. The objective is to improve the fellows’ knowledge of the surrounding society through participatory lectures and discussions.

In addition to these debate evenings, monthly half or full days excursions to landmarks around Denmark are arranged. Training institutions also arrange visits to Danish schools and institutions.

By disseminating knowledge about Danish values and competences to other countries and cultures DFC takes part in fulfilling the Public Diplomacy Strategy which is one of the focus areas of Ministry of Foreign Affair’s globalisation strategy.