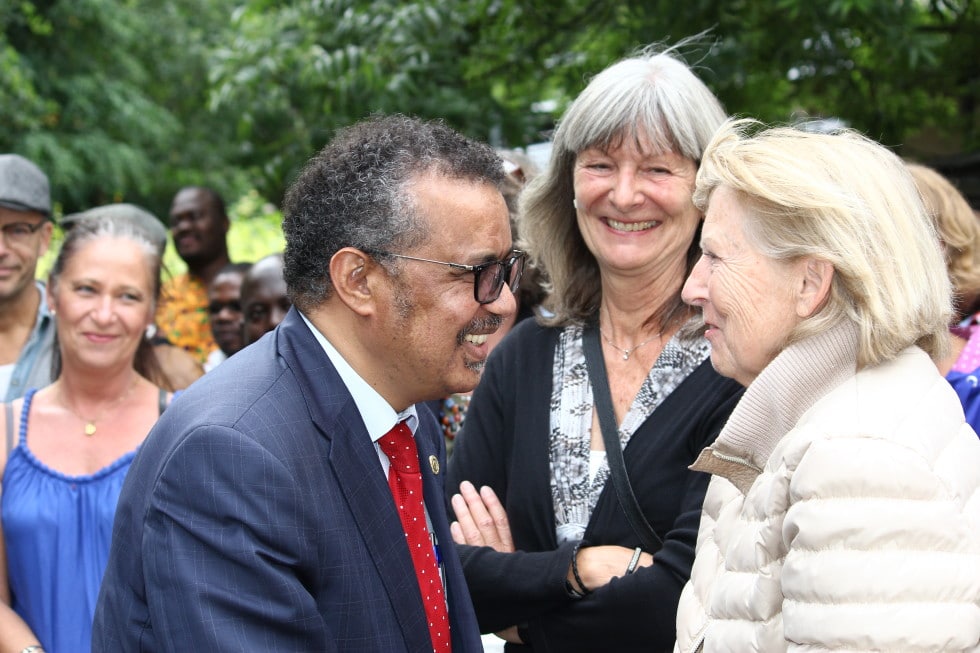 Many of the health experts we listen to during the Corona /COVID-19 pandemic have a background as Danida fellows. This is particularly true of WHO Director-General Dr Tedros Adhanom Ghebreyesus.

Unless we are scientists by profession or working in health, most of us would not know their names, but a few weeks after the CORONA /COVID 19 Pandemic hit Europe, global health experts have become familiar. Around the world, WHO Director-General Dr. Tedros Adhanom Ghebreyesus has become a household name and in Denmark experts like Kaare Mølbak, Anders Fomsgaard and Peter Aaby are now well known. What most people probably don’t know, however, is that these experts all have a common past as Danida fellows and have built their expert knowledge from international health collaboration.

Centerstage in fighting the pandemic
Let us first look at Dr Tedros Adhanom Ghebreyesus. As a young doctor, Dr. Tedros studied at the Danish Bilharziasis Laboratory and in 2017 he became the first person to receive the Danida Alumni Award. He used the occasion to emphasize the significance of his stay in Denmark.

Advising the government
Then let’s turn to Denmark. Among the Danish health experts, who contribute with expert advice at governmental level is Kåre Mølbak, Technical Director of Infectious Preparedness at Statens Serum Institute. In the online newspaper Altinget’s April 5th issue 2020 he is described as being ultimately responsible for the data on which the Government acts. Read Altinget’s article here. Kaare Mølbak has for example been part of Danida funded collaborative research projects in Tanzania and Ghana.

The egg boiling method
Another of the Serum Institute’s experts is Anders Fomsgaard, Professor and Head of Virus Research & Development. While the health authorities and the government were stuck because of the lack of testing equipment, Professor Fomsgaard came up with the so called “egg boiling method” where a sample of saliva, taken from a patient can be tested after it has been boiled at 98 degrees for 5 minutes. Read about the egg boiling method in Copenhagen post and in Videnskab.dk. In 2019, Anders Fomsgaard published the book ‘It’s just a virus – Wild stories about viruses and the fight against them’, which is based on his lifelong research into viruses across the world including Danida funded work in Africa.

The Bandim Project
Dr. Peter Aaby and Professor Christine Stabell Benn also belong to the group of global health researchers that have undertaken Danida supported research in the past. In Videnskab.dk and in Politiken the two have questioned the Danish authorites’ strategy of home isolation and warned that it may be more efficient to roll out a scheme where Danes infected with corona virus are isolated from the rest of the household. Their longstanding knowledge on how viruses spread comes from their measles research through the Bandim project in Guinea-Bissau, which Danida also supported. Read about the Bandim health project. Morten Sodemann, Professor at University of Southern Denmark, has contributed with the same argument. Read Sodeman’s argument in Politiken. Sodemann too has a research background from the Bandim project and several other Danida funded collaborative research projects.

International cooperation is a must
Flemming Konradsen, Professor, Global Environmental Health, University of Copenhagen and Chairperson of Danida’s Consultative Commitee for Development Research (FFU) is another now familiar name. He has repeatedly said that the lack of protective equipment like masks is not only a European or national but a global concern. He has thereby reminded us of how deeply interdependent the world is and how principles of solidarity and mutual collaboration are needed all over the world in and outside times of crisis.

All these health experts are in themselves testimonies to the significance of cross-continent and cross border collaboration. From Dr Tedros to Kaare Mølbak, and Anders Fomsgaard and with them many other Danish and international scientists and researchers, the foundation of their expertise is based on international work and research collaboration.

Danida has granted support to development research and research collaboration for more than three decades and thus helped to develop the current much needed health expertise. An expertise which today benefits not only virus infected patients in developing countries, but people all over the world.